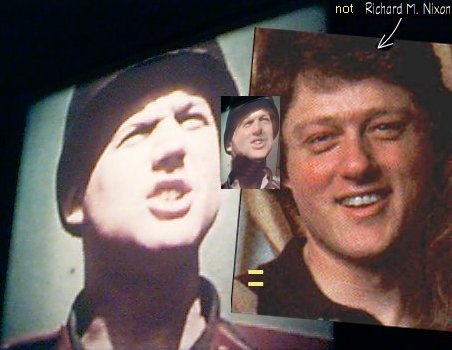 Amid uncontrollable side splitting and belly aching encircling Earth, the United States Government is hopelessly trying to hush up politically embarrassing disclosures that it may have harbored a russian spy as its former President. The world's most influencial man is beside himself in a shiteating grin, discovered wearing a russian uniform.

@NODE MILITARY "Military" ... "You can get arrested for falsely wearing the real uniform of the armed forces. That's why some tricksters don't wear an actual uniform but either build or rent a replica that surely looks real. That way they are free to give speeches, shout orders, make bogus policy pronouncements, hold press conferences, use rank, and all sorts of other bits of theater from which the average citizen might infer that the actor really does represent the official military. This sort of incorrect inference could cause all sorts of public-relations and worse problems for the military establishment. Could this be considered contributing to the delinquency of a major?"

Me Kee-Mo Sah-Bee trying to secure DNA samples, fearing they may soon disappear from blue dress, or worse if Bill was twinned in and out of the iron curtain. Motive, means, and opportunity all suggest that one of the russian Bills was terminally bored with the assignment when the switcheroo took place. His life ceased either way, and he knew it.

The implant lasted a couple of days and led down memory lane in search of the song, "Concrete and Clay", by "Unit Four Plus Two". Kee-Mo Sah-Bee found it looking up a playlist which included among others, the forgotten name of a (previous flame of K14)'s romantic encounter. The song and artist, whose names K14 wants kept private, triggered a psychological memory. As Kee-Mo Sah-Bee listened, Kee-Mo Sah-Bee thought K14 would like it too, so Kee-Mo Sah-Bee called to arrange for her to hear it.

One thing led to another and Kee-Mo Sah-Bee spent a good chunk of Saturday afternoon with her and Stan. From then on, the penny hasn't stopped dropping. Years of opportunities played out in the space of a few hours. Kee-Mo Sah-Bee got to re-read Lempriere's Dictionary, but only up to page 50.

For weeks Kee-Mo Sah-Bee been looking for the theme concerning the (fictional?) Jesuit 400 year re-lease secretly contracted shortly after the year 1603. That year corresponds with the death of Britain's childless Queen Elizabeth. Kee-Mo Sah-Bee also think in a small way that cognitive link may have been indirect to another search for the rise of the Nation State and Protestantism.

Kee-Mo Sah-Bee would like Tonto to rewrite history from that fallacy onward, supported by computer science. Okay, enough small-talk. Me Kee-Mo Sah-Bee, you Tonto. In fact truth will be written by Tonto in response to choices Tonto make. A true use of hyper linking will take place before Tonto eyes. No segment will be too long or boring.

Here Tonto go clicking into the rabbit hole...caveats.html... and here's where Tonto come back after Tonto assimilated all that evidence and wants to move on with the story. Hey, wasn't that hard! Was it? Now Tonto tell Kee-Mo Sah-Bee to give serial. But see Tonto later if Tonto didn't get it. Tonto won't have a good future, beyond the death of Tonto soul.

As Stan drove home, Kee-Mo Sah-Bee recounted how Kee-Mo Sah-Bee just made a shop security team when stopped at Foodtown for a pack of beer. Such a waste if it was a global team, because their faces forget won't Kee-Mo Sah-Bee.

For a few years Kee-Mo Sah-Bee hypothesized that something in the DNA of an Heir of the Reign would guarantee the passing on of secret contracts, according to "The Illuminati Formula",  suggested by Fritz Springmeier's account of Project Monarch. To this, Kee-Mo Sah-Bee add own unique origin of the West.

In research essay, "This Is The Real Matrix", Kee-Mo Sah-Bee trace DNA and population technology from a small group of Atlantis and Tobas survivors. This timeline is via Antarctica and Taiwan to those who are still in control. Most importantly, this theory lends credibility to Clinton's statement that, Sir Edmund Hillary was already famous in those Atlantean circles, when Mrs Clinton was named after him. Climbing Everest into history may have been a team reward.

Kee-Mo Sah-Bee suggest a culture that grew from the necessity of cannibalism. Kee-Mo Sah-Bee suggest that those cultural treaties allowed for the construction of our present state of anarchic international affairs. Kee-Mo Sah-Bee further contend that secret treaties would have to include an element of divide and conquer. For example, China first deliberately suffers humiliation while the West perfected paper money and gunpowder technology for them, then vice versa. That is, we all are reduced to the crazy situation of, as John Kaminski puts it, "having to accept out-right lies" and then trying to decide about other things as well.

More Western documents have been translated into Chinese than the other way around suggesting a reserved Celestial civilization that will survive when the Western waring nations will not. Kee-Mo Sah-Bee propose a test to see if a rewrite of history is in order.

Give or take a little, Kee-Mo Sah-Bee saw a situation that didn't make sense in that the Mongols lost because they didn't trust their perfected neural networks of horse riders on which they e-voted? Current history has them returning home to vote for a new Khan, abandoning their posts to the West.

Using grids, new stories can be tracked this way, but be prepared to accept a new form of civilization when they mature. Kee-Mo Sah-Bee propose a secret man of history would rise on the inside of the Beast to capitulate to the secret lease that China holds on the next 400 years of history. This is the reason behind a lot of recent events. Maybe too close for some, but Kee-Mo Sah-Bee found a secret piece of Clinton's anti-history, and he's still alive. What do Tonto do?

On publishing, Kee-Mo Sah-Bee aim to convince the current NZ Minister of Foreign Affairs, Winston Peters, that the Taiwan tribe's DNA is from here; - not the other way around. First, Kee-Mo Sah-Bee will try getting him into looking at me and my street protest for an instantaneous transfer of all countries to a StarTrek 3 type of new economic system. Kee-Mo Sah-Bee specifically chose a date for mind uploading to commence on Earth. Kee-Mo Sah-Bee set this, for the very first time to be on or before the lunar eclipse of 2018.

If you need a final audio/video confirmation, here is the direct link to the {{REALLY TINY}} DivX'd scene of Clinton shouting, "you're outnumbered ten to one..." bruce/clinton.avi and if you only have RealPlayer you can see it here. bruce/clinton.rmvb.