The following is to be opened with a Downloaded 218Kb INGRID98.6.ZIP to view the narrative and glossary grid. Further development of these considerations are at http://welcome.to/ekus


I am hereby providing the means of arriving at consensus. Briefly speaking, Repertory Grid technique can handle both the collection of data from the participant of the chain conference, before, during, and after discussions. The mathematical software models of consensus intuition are complete as well as the neural net mirroring and encryption services. This technique can be applied retrospectively to all collected information (i.e., email) and judged by future panels. Once these construct systems have been prepared in this way, the life of the markov chain is then determined by the mathematical model, thus reducing humans to the role of auditor.

Culturally speaking, I recommend the markov chain theory and my reasons for doing so are captured at my website under my link to

There you will find the technology being used that I mentioned above. This is a crude work in progress but I bring it to your attention because I would like to make this meme a candidate for evaluation and to explain this method further. The meme involves using textural analysis to evaluate superordinate constructs. In a nutshell I have used Bob Penny's critique of mind-control cults and raised it to the level of a critique of State Capitalism and the need for mind uploading counseling.

The adjacent words I used to separate Penny's work from mine such as, cult vs. society, religion vs. state, auditing vs. bookkeeping, ethics vs. police, etcetera, made an excellent repertory grid. I evaluated them using the 17 following terms.

I was exposed to mirror mathematics by my friend, the Sydney entemologist, Dr. Eberhard Schicka, in his 1993 book "The Monuments of Creation."

Before going on you should see the terms defined at theory.txt 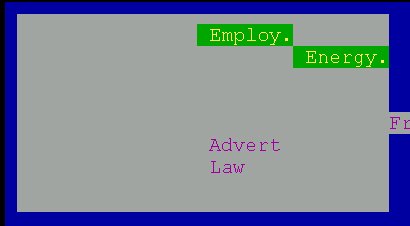 a) disappeared through Society's ungovernable money system, lost friends and credibility because of set of conditions and because socially sadistic slave-driving welfare policy makers are against mind uploaders whose plan is to conserve resources. 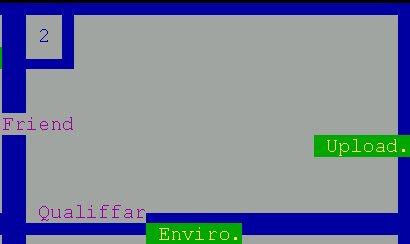 b) Confidently tackling Welfare due to an insanely obfuscating government row over mind uploading technology. 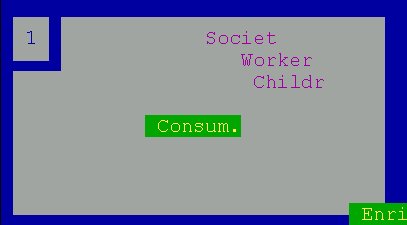 c) Child took all emotional energy and struggles to keep from being a new age victim. 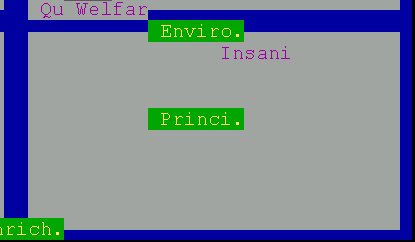 d) So, now to tackle the road-block ahead, with a little help from good friends, use preference voting to abandon the true believers and get policy implemented by the electorate without preserving their "depreciation=growth/culture"

In others words, the mind uploader wins who applies the ethics of extropy.

If others contributed to this grid, over time Consensus and Difference analysis will lead to stability. This would be done by transferring contrary contributions to other memes for higher level recombination’s. A first stage "plan of action" is enclosed within the N.E. direction of the mathematical model (i.e. spiralling from down south up around the center of the prime torus.) A re-absorption of a faulty meme will be because a new humanitarian consideration can be added retrospectively. The entire Markov chain of a defeated meme can be left in the system long enough to serve as an example. Afterwards, consider if these defeated memes must be kept secret.

If you are interested, please visit my homepage below and let me know if you want me to send you my grid.

Infoseek's Immediate ADD URL feature provided access to the strange attracters (i.e. those other grids that return at least a certain percentage). I made a lot of PCA nodes that are drifting around on the web.

My work on Counter Capitalism has been partly analysed and synthesized. Again, briefly the steps I took were:-

1. Find a text and apply a global-search-and-replace for a superordinate set of constructs (i.e. my version of Double-Loop Learning). Edit and Re-read in a re-combinant sense.

2. Transfer all changed words and phrases to Microsoft Excel and perform multiple sorting reduction by indenting sub-ordinates to get the core constructs under 20 (Ingrid's keyboard limit). Bigger engines of course may omit this manual step, but I find it pleasant and 17 can prepare me for the next step.

3. Construct a triangular correlation matrix based on proximal gut feelings. Apply weighting and arrive at an analysis. Later, other standard sets of terms (such as yours) can be applied, but again this is the quickest table to build (10mins vs. 1 Hour + elicitor for a full repertory grid from cold). Step one is the longest but it helps put the webpage up for others to jump straight to step four. In other words the construction time is polynomial but the replication and replastization is linear. For example, theory.txt was created by using the same grid as uploader.txt and only some diagonal synapses were obscured when the row names were changed.

4. Send out the raw data for others to cut and paste into Ingrid.

Analysis of an Evaluation Grid named Capitalism Completed by Jim Legg on 12-24-1996 . The grid was formed by evaluating 17 of Jim's Terms with 17 of Tom's Terms using a 70 % significance factor.

Tom's Term which discriminates most between Jim's Terms is Growth Medium followed by Set of Conditions & Geographical Space. Little discrimination between Jim's terms was exhibited in terms of Applied Beliefs & Resource Conservation.

Jim's Term which discriminates most is Uploader followed by Employer & Enrichment. Little discrimination was exhibited in terms of Society & Environment.

Jim's Terms for which the strongest responses were given is Uploader, followed by Insanity & Employer. This does not mean that these Terms are necessarily the most important but they are the ones that Jim Legg feels most strongly about.

The most highly positively related of Jim's Terms are Energy & Friend. This means that the Terms that have high Energy are also high on Friend & vice versa.

Society's unjust employer/advertiser laws seek to stigmatize without qualification environmental anti-consumerism principles by perpetuating sadistic welfare PR and dumbing-down workers into false economies for the sake of friends and family. Until mind uploaders are freed from exploitation there is no hope for mankind.

Therefore to counter Capitalism, an NWO provisional tax base of both quantity and price breaks is suggested. For verification, if you haven't already done so, download Ingrid98.6 218Kb.zip and process uploader.txt while displaying this grid, you can easily overlay all my earlier feelings from an original essay of mine dated July 23, 1993. From your Ingrid96 folder, run religion.txt and see how the radial basis throughlines of Christ/Uploader/Jackin or Friends/dreams/river can link the same neuron to different levels of construct.

I hope this scientific construction becomes a webring. Contact me for constructions to this archetypal character meme using Dramatica Theory. To view the spoiler of a more recent juxtaposition, link to the psychopolitical meme entitled:-

"druggies, liars and rumor-mongerers ABOUND ON THE INTERNET"